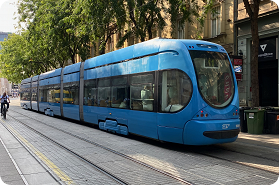 SAM relevant for Infra buildings and people in Zagreb (Croatia)

Sensornet carried out measurements on the entire tram network of Zagreb with it's SAM Infra product to evaluate the condition of the tracks and identify individual locations with significant increased vibration on the track (hotspots). The measurements were carried out in collaboration with the Universaty of Zagreb Faculty of Civil Engineering (contact person assist. prof. Ivo Haladin, Ph. D. CE) and carrier ZET (Zagreb Electric Tram).

Where most SAM customers perform the measurements in the context of cost optimalization or environmental management, this is of the second order in Zagreb. The carrier is mainly concerned with the possible risk to the buildings as a result of the earthquake(s) that have accurred in 2020 and demaged buildings near the tram infrastructure. A brief report of the research is available on the University's website. This report is written in Croatian, but can easily be automatically translated to your own language (e.d. in webbrowser Chrome).

Below is a summary of the part of the report that is relevant to SAM.

The University's attention had been focused on all vulnerable buildings along the infrastructure. Sensornet's long term measurements over the entire tram network provide direct inside into which locations within Zagreb the vibrations at the source (Wheel-rail-contact) should be reduced. In consultation with ZET, it had been determined where measures will be taken.

An example of the analysis of such a location(at the intersection of Frankopanska Street and Ilica) is shown in figure 4 (see below), by comparing the vibration levels before and after the intervention of the track (adjustment of the level crossing elements). The vibration levels before the intervention were increased (mean above 160 dB, shown in red) and decreased by more then 10 dB after the intersection change.

Figure 4: The results from SAM Infra (by Sensornet). Illustration of the reduction of vibration levels measured on the tram at the intersection before (left) and after (right) the replacement of the intersection.

Effect on the building and people

The reduction in vibration levels is a good indicator of how long-term monitoring can detect sites of increased vibration and make recommendations to the infrastructure manager on the urgency of intervention on the track te reduce elevated vibration levels that could potentially negatively affect nearby buildings and people who live in it.

As part of the latest surveillance activity, vibrations from passing tram vehicles were monitored on the damaged buildings themselves near the tram line (performed by University of Zagreb)

Figure 5: Measurement location on the second floor of the building

Publication of the report, we refer your to the website of the Universitas Magazine. https://www.universitas-portal.hr/suradnja-gradevinskog-fakulteta-i-zet-a/